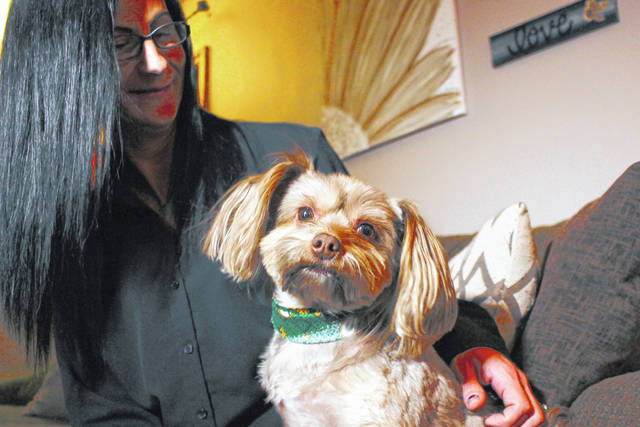 Amy Carter looks at her Yorkshire terrier-Chihuahua mix Bentley, who has epilepsy. Carter, gives him CBD, which she says has reduced his seizures. - AP photo 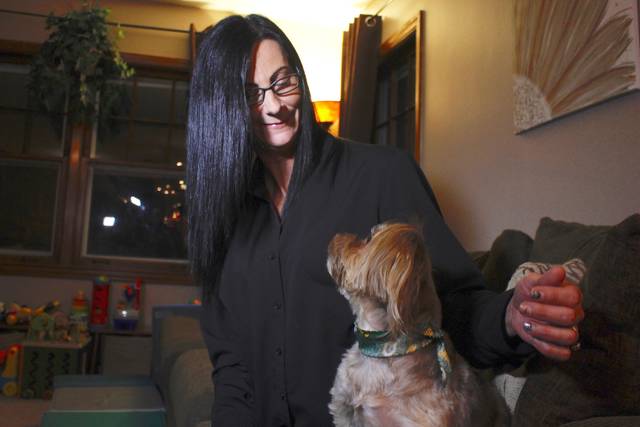 The federal government has yet to establish standards for CBD that will help pet owners know whether it works and how much to give. But the lack of regulation has not stopped some from buying it, fueling a $400 million CBD market for pets that grew more than tenfold since last year and is expected to reach $1.7 billion by 2023, according to the cannabis research firm Brightfield Group. - AP photo 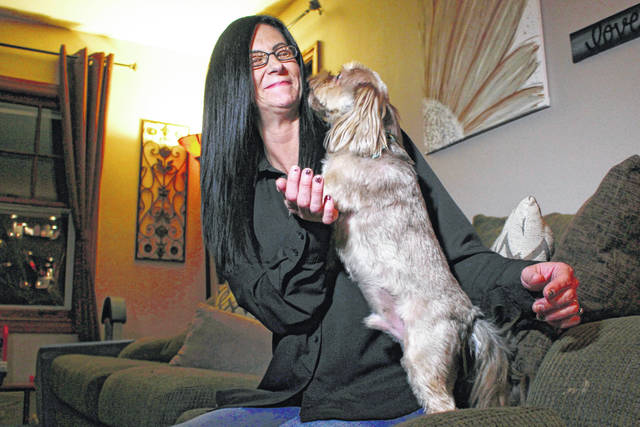 Amy Carter lets her dog Bentley lick her face at her home in St. Francis, Wis. Carter gives him CBD, which she says has reduced his epilepsy-related seizures. - AP photo 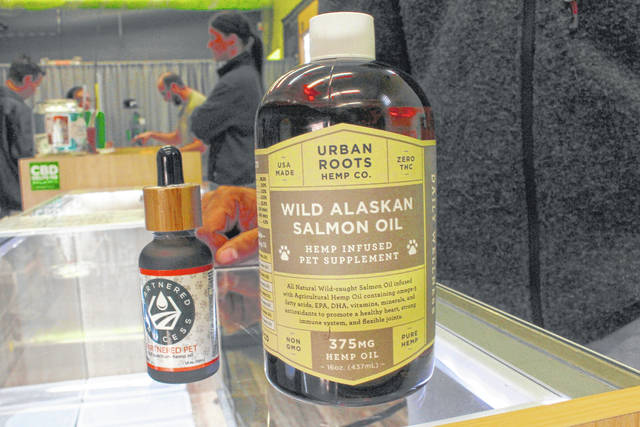 But some of these products are all bark and no bite.

“You’d be astounded by the analysis we’ve seen of products on the shelf with virtually no CBD in them,” said Cornell University veterinary researcher Joseph Wakshlag, who studies therapeutic uses for the compound. “Or products with 2 milligrams per milliliter, when an effective concentration would be between 25 and 75 milligrams per milliliter. There are plenty of folks looking to make a dollar rather than produce anything that’s really beneficial.”

Such products can make it to the shelves because the federal government has yet to establish standards for CBD that will help people know whether it works for their pets and how much to give.

Still, there’s lots of individual success stories that help fuel a $400 million market that grew more than tenfold since last year and is expected to reach $1.7 billion by 2023, according to the cannabis research firm Brightfield Group.

Amy Carter of St. Francis, Wisconsin, decided to go against her veterinarian’s advice and try CBD oil recommended by a friend to treat Bentley, her epileptic Yorkshire terrier-Chihuahua mix. The little dog’s cluster seizures had become more frequent and frightening despite expensive medications.

“It’s amazing” Carter said. “Bentley was having multiple seizures a week. To have only six in the past seven months is absolutely incredible.”

But some pet owners have found CBD didn’t work.

Dawn Thiele, an accountant in Oak Creek, Wisconsin, said she bought a $53 bottle of CBD oil from a local shop in hopes of calming her 2-year-old Yorkshire terrier during long car trips.

“I didn’t see a change in his behavior,” said Thiele, who nonetheless remains a believer.

“The product is good, it just didn’t work for my dog,” she said.

Short for cannabidiol, CBD is a non-intoxicating molecule found in hemp and marijuana. Both are cannabis plants, but only marijuana has enough of the compound THC to get users high. The vast majority of CBD products come from hemp, which has less than 0.3% THC.

CBD has garnered a devoted following among people who swear by it for everything from stress reduction to better sleep. Passage of the 2018 Farm Bill, which eased federal legal restrictions on hemp cultivation and transport, unleashed a stampede of companies rushing products to the market in an absence of regulations ensuring safety, quality and effectiveness.

Products for people were swiftly followed by CBD chewies, oils and sprays for pets.

“The growth is more rapid than I’ve seen for any product in 20 years in this business,” said Bill Bookout, president of the National Animal Supplement Council, an industry group whose member companies agree to testing and data-gathering requirements. “There’s a gold rush going on now. Probably 95 percent of the industry participants are responsible, but what’s dangerous is the fly-by-night operative that wants to cash in.”

The U.S. Food and Drug Administration is developing regulations for marketing CBD products, for pets or people. This year, it has sent warning letters to 22 companies citing violations such as making claims about therapeutic uses and treatment of disease in humans or animals or marketing CBD as a dietary supplement or food ingredient.

“It’s really the Wild West out there,” said S. David Moche, founder of Applied Basic Science, a company formed to support Colorado State University’s veterinary CBD research and now selling CBD online. He advises consumers to look for a certificate of analysis from a third-party testing laboratory to ensure they’re getting what they pay for.

“Testing and labeling is going to be a critical part of the future of this industry,” Moche said.

Wakshlag said products must be tested not only for CBD level, but also to ensure they’re free of toxic contaminants such as heavy metals and pesticides and have only trace amounts of THC, which in higher levels is toxic to dogs.

That’s starting to change, however. A small clinical trial at Colorado State University published in the Journal of the American Veterinary Medical Association in June found CBD oil reduced seizure frequency in 89 percent of the epileptic dogs that received it.

A clinical study headed by Wakshlag at Cornell, published in Frontiers in Veterinary Science in July 2018, found CBD oil helped increase comfort and activity in dogs with osteoarthritis.

“The results of our first epilepsy study were promising, but there was certainly not enough data to say CBD is the new miracle anti-convulsive drug in dogs,” McGrath said.

Seizures are a natural focus for research on veterinary CBD products, since Epidiolex, the only FDA-approved drug containing cannabidiol, was approved last year for treatment of two severe forms of epilepsy in children. Veterinarians are allowed to prescribe Epidiolex for pets, but it’s prohibitively expensive — upwards of $30,000 a year for an average-size dog, McGrath said.

The Kennel Club’s chief veterinary officer, Jerry Klein, said CBD is “over-hyped” but promising for treatments like pain relief. He’s hopeful that the growing market will result in more money being invested in research to prove uses.

Meantime, the American Veterinary Medical Association is telling veterinarians they can share what they know about CBD with clients but shouldn’t prescribe or recommend it until the FDA gives its blessing.

“There’s no question there’s veterinary interest in these products as therapies, but we really want to see the manufacturers demonstrate that they’re effective and safe and get FDA approval so we can have confidence in the products,” said Gail Golab, chief veterinary officer for the association.