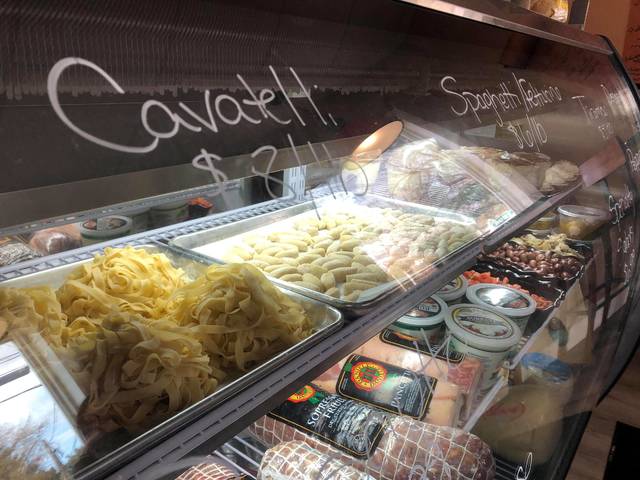 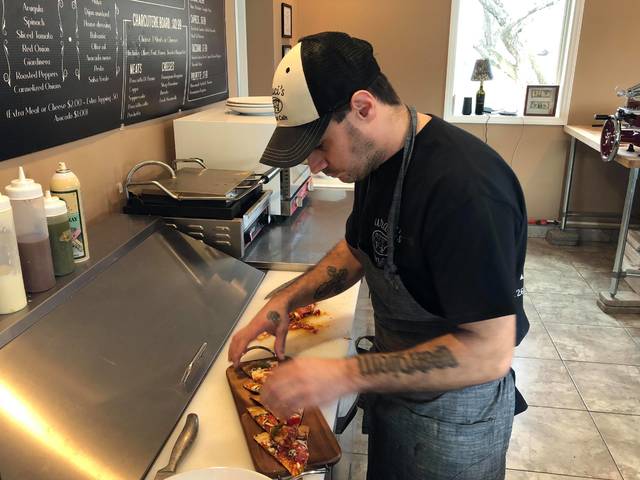 Dan Matechak dishes up slices of a piadina personal pizza. 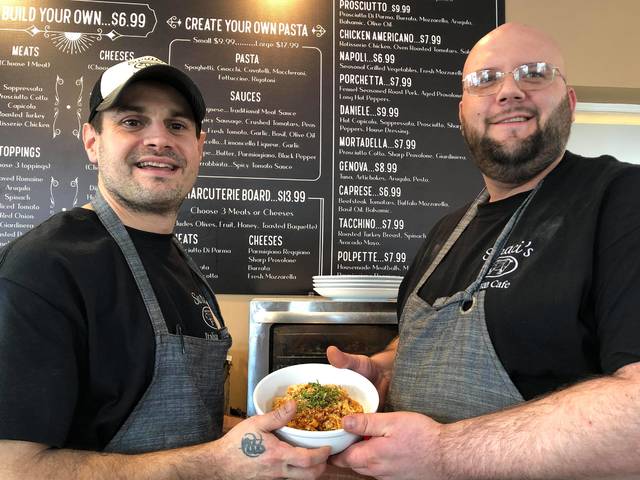 Dan Matechak and Matt Drevenak hold a dish of pasta at Suraci’s Italian Cafe. The eatery makes its own fresh pasta and sauces. 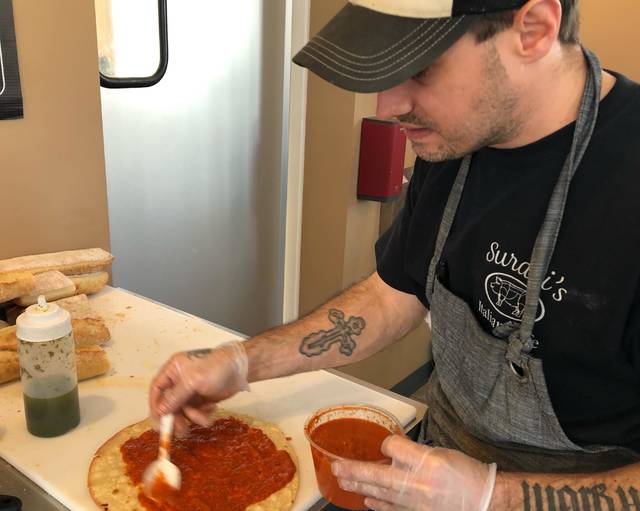 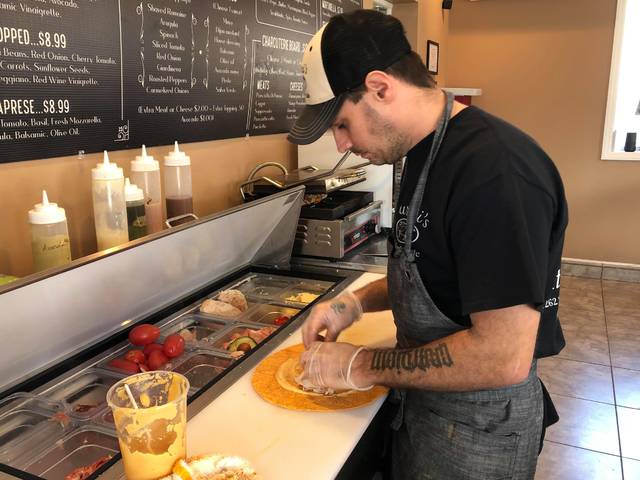 Dan Matechak works on a wrap at the counter.

If they don’t have the daily specials posted on Facebook by about 10:30 a.m. each day, owner Dan Matechak and his staff will start to get calls from customers.

“It’s great to see that kind of customer loyalty,” Matechak said during an interview Saturday afternoon at the Wyoming Avenue eatery, which is located across the street from the Forty Fort Municipal Building.

“Social media is important,” Matechak added when discussing how he spreads word of mouth about the cafe, which opened Dec. 4.

Equally important is the food, and that’s an area in which Matechak excels.

After graduating culinary school in Pittsburgh, Matechak did an apprenticeship at famed French restaurant Le Bec-Fin in Philadelphia, then worked at sister eatery Brasserie Perrier before returning to Northeastern Pennsylvania in 2009. He then spent a decade as a chef at Isabella Restaurant on Route 315 in Plains Township before launching his own restaurant last year.

Matechak knew he wanted to open a casual Italian eatery with affordable prices, but also knew he needed to differ from the norm around here.

“I just feel there’s a lot of pizza and wing places. I think with our background we wanted to do something different — not necessarily white tablecloth,” Matechak said, referencing his friend, sous chef and longtime coworker Matt Drevenak.

The plan was for an Italian deli that would offer specialty meats, cheeses and hoagies, as well as pastas, desserts and more — and they try to do everything from scratch.

The Daniele hoagie — named for the owner — has been a big seller, Matechak said, with the combination of capicola, soppressata, prosciutto and other Italian delicacies drumming up much social media buzz.

But Matechak says the deli’s signature offering is its pasta, pointing proudly to golden strands of macaroni in the deli case and an extruder on the counter nearby.

“People that know pasta know what kind of time goes into this,” Matechak said, adding that Suraci’s also makes its own meatballs.

“People can see the difference,” he said.

All of this is a labor of love for Matechak, 40, a Lackawanna County native who said he returned to the area so that he and his young son could be closer to family.

“Even though you’re only two hours away, you miss a lot of stuff,” he said of living in Philadelphia.

“I love the area, the schools are great,” he added, then chuckled: “If I ever leave again, it’s going to be for a beach.”

Like many first-time entrepreneurs, Matechak is also learning a great deal about the joys and hard work of owning his own business.

“There’s a lot of expenses that you never thought of as a chef. You really have to be involved in everything and aware of the whole spectrum,” Matechak said.

The staff is made up of Matechak and four others, including his girlfriend Annie and Drevenak.

And running a restaurant requires long hours, but Matechak and Drevenak also acknowledged an upside from their days in fine dining: With emphasis on take-out and a largely dayside crowd, “we’re out of here by 7 p.m.,” Matechak said.

“This place is amazing. I’m back there all day making soups from scratch, sauces,” Drevenak said. “And a lot of our older customers really love the soups.”

While they don’t do traditional pizza, Suraci’s seems to have a hit on its hand with personal flatbread pizzas called piadinas, garnished with fresh toppings such as mozzarella chunks, parmesan cheese and basil.

All-in-all, the formula seems to be working.

During Saturday’s mid-afternoon interview the restaurant had a steady customer flow, including a mix of return diners and new customers asking about specials.

Matechak said he’s already had some folks ask about whether expansion is in the works; he said his primary focus right now is making the Wyoming Avenue cafe a success.

How to fill out the updated W-4 Tax Form