… on Nov. 25, or whenever you’re feeling thankful

MT & I have this recurring exchange. Me: “Thanks for marrying me.” MT: “Thanks for asking.” Me: “Only a dope wouldn’t ask. And mom didn’t raise any dopes.”

There’s another story behind the “dope” comment, but I leave that for MT to convey at her discretion and, no, it isn’t aimed at me (I’m pretty sure).

What’s that got to do with a test kitchen recipe? Regular readers know that while we technically met in the newsroom, we connected while working on a feature story about the 50th anniversary of the Appalachian Trail, walking it for five days to meet through-hikers — she doing the interviews, me doing the photos.

I proposed on the return leg of a walk from White Haven to Jim Thorpe and back (celebrating her 40th birthday), a walk that became an annual November tradition. And we started our honeymoon backpacking the 30-mile West Rim Trail above the Pine Creek Gorge in Tioga County, a hike we reprised for our 10th anniversary and again last week for our 20th.

I made this “Thanksgiving Feast” for her on our anniversary at camp after the first day of hiking last week. It comes from the cleverly named “freshoffthegrid.com” website. I came across in in my continuing quest to find cheap home-made substitutes for pre-packaged freeze-dried meals, and as far as we’re concerned it’s a winner.

While I wouldn’t expect most people to actually make this at home, don’t dismiss the idea, especially if you have kids. It seems a very child-friendly concoction to lure them into cooking fun. Just add water to the three separate mixes, mash them together and have a blast with stuffing, gravy and potatoes in one mold-able heap on each plate.

At camp — even one you drive to — it should work well both as a family project and as a meal. Obviously, if you’re not actually lugging the ingredients on foot (and have a cooler or refrigerator) you could use fresh cooked chicken rather than canned.

• 7 ounce pouch (or can) pre-cooked chicken

Split the food between the two bowls, spooning the chicken and gravy over the top. Enjoy! 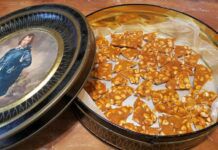 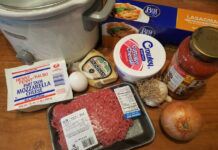 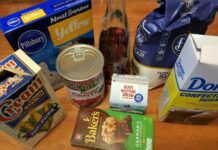 For a birthday cake, enter the Black Forest