A lifelong resident of the area, Karambelas became synonymous with his alma mater Wilkes University through the years, becoming one of the school’s most beloved and generous donors.

“Wilkes would not be the University that we are today if not for Clayton Karambelas,” said Wilkes president Dr. Greg Cant in a release issued on Tuesday afternoon. “In addition to being a titan in the community, Clayton was a wonderful friend and generous alumnus.”

Karambelas received his Bachelor’s degree in commerce and finance from Wilkes (then known as Wilkes College) in 1949. During his time as a Colonel, Karambelas served as student body president, joined the wrestling and tennis teams and was a member of the Letterman’s Club.

He served on the Alumni Association Board of Directors for a number of years, and was granted emeritus status in 2018.

Karambelas’s love for his school never wavered, and he and his wife Theresa donated countless dollars and hours to ensure that the Wilkes campus and facilities were among the best in the area.

“All one has to do is walk through our campus to understand the impact he and his beloved wife, Theresa, had on the University,” Cant said. “This includes the state-of-the-art Karambelas Media and Communication Center, located adjacent to the Karambelas East Campus Gateway, the pergola outside of Evans Hall and the digital marquee in front of the Dorothy Dickson Darte Center.”

The Karambelas Media and Communications Center was supported by what was referred to at the time as “one of the largest gifts in Wilkes history” made by Karambelas and his wife.

The husband and wife team received Wilkes University’s highest honor in 2016, when they were awarded the President’s Medal.

The list of awards and recognition compiled by Karambelas through his years of service to the community also includes the Robert K. Mericle Leadership Award in 2017 (Mericle, the award’s namesake, referred to Karambelas as “a fixture of the area”) and the Osterhout Free Library’s Evergreen Award, given to an individual to recognize their volunteer service and support of the library.

Visiting hours for Karambelas will be held from 4 to 7 p.m. on Friday at Kniffen O’Malley Leffler Funeral and Cremation Services, 465 S. Main St., Wilkes-Barre. A funeral will be held at 10:30 a.m. Saturday at Annunciation Greek Orthodox Church on Ross Street, with entombment to follow at St. Mary’s Cemetery.

“This is a massive loss. Our hearts are with Theresa and the entire Karambelas family,” Cant said.

“We mourn with her as we honor Clayton’s life and lasting impact.” 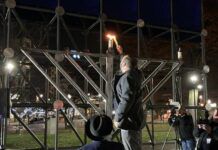 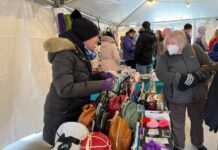 Christmas in the city 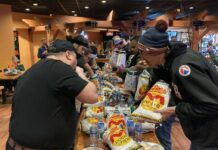 Middleswarth lovers chow down on chips for contest