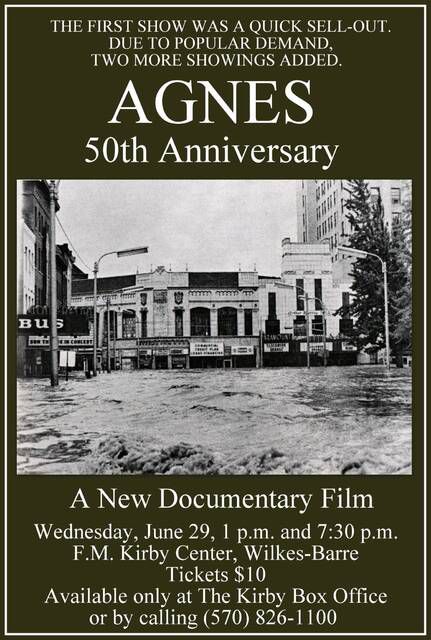 WILKES-BARRE — Alan K. Stout, who also served as executive producer for “Agnes,” a new 90-minute documentary, said the film serves as a tribute to our community.

“Though Agnes and the floods might be the stars of the film, the heroes of the film are the people of the Wyoming Valley of 1972,” Stout said. “And for many of us, that was our parents and our grandparents.”

The film was produced in cooperation with the Wilkes-Barre Preservation Society to note the 50th anniversary of Hurricane/Tropical Storm Agnes, which resulted in much flooding of the Wyoming Valley in June of 1972 and, at the time, was considered the worst natural disaster in the history of the United States.

“Agnes” will premiere at the F.M. Kirby Center on June 23, the 50th anniversary to the day of the flood.

The debut sold out so quickly that additional screenings have been added.

Though Agnes affected other communities along the east coast and Pennsylvania, the documentary focuses on the Wyoming Valley, which was the hardest hit by the floods.

Stout said the film also highlights the resiliency and spirit of the people of the Wyoming Valley and the fortitude that was shown in putting the community back together.

The film was edited and co-directed by Tim Novotney. Bob Savakinus served as co-director. Tony Brooks served as historical consultant. It was written and narrated by Alan K. Stout, who also served as executive producer.

“The film ‘Agnes’ is a project we’ve been working on for quite some time,” Stout said.

“But when we met with Bob and Tim, back in the summer of 2020, we knew we found the right people to not only get it done, but get it done in time for the 50th anniversary. Working with them, and with Tony and the Wilkes-Barre Preservation Society, has been a great team effort. And there has been tremendous support from the community, without which the film would not have been possible,” he added.

‘It was beautifully done’

Longtime Times Leader reporter Mary Therese Biebel, a Wilkes-Barre native who was 11 when the flood hit, attended a media screening of the documentary last week.

“It was beautifully done, very professional, and I learned things that I hadn’t known,” said Biebel.

“Sure, I remembered some things, like the helicopters flying overhead. But I did not know that the North Street/Pierce Street Bridge had been washed away.”

She grew up in South Wilkes-Barre, safely above the floodwaters. Still, Biebel remembers meeting many new children that summer, as families sent had sent them to live with aunts and uncles in the area because it was safe and dry.

Biebel admitted that the documentary left her in tears at the end — though they were “happy tears.”

“What really touched me was the way residents came together: Young and old, rich and poor, black and white, working side-by-side to fill the sandbags,” Biebel said. “That really, really was inspiring.”

That was followed by footage of residents who told interviewers that they intended to clean up, rebuild and stay in the Wyoming Valley, because it was their home.

“It made me proud to be from Wilkes-Barre,” Biebel said. 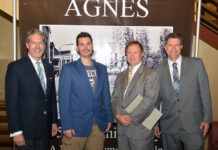 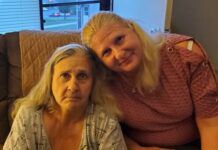 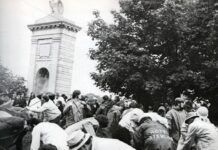