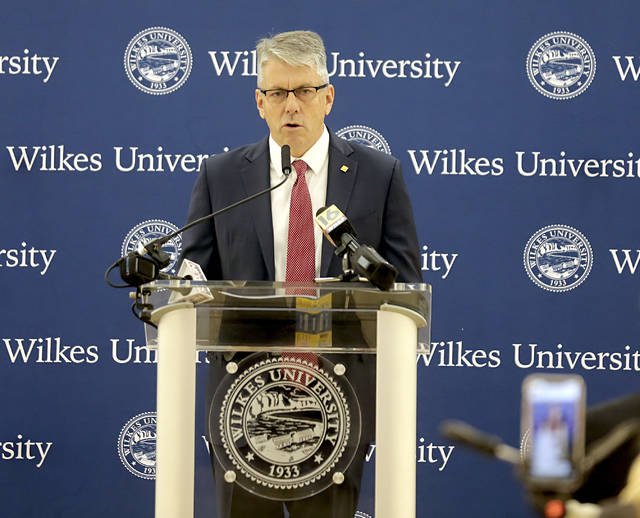 Greg Cant offers remarks after being announced as the seventh president of Wilkes University at the Sordoni Art Gallery in Wilkes-Barre on Thursday morning. - Bill Tarutis | For Times Leader 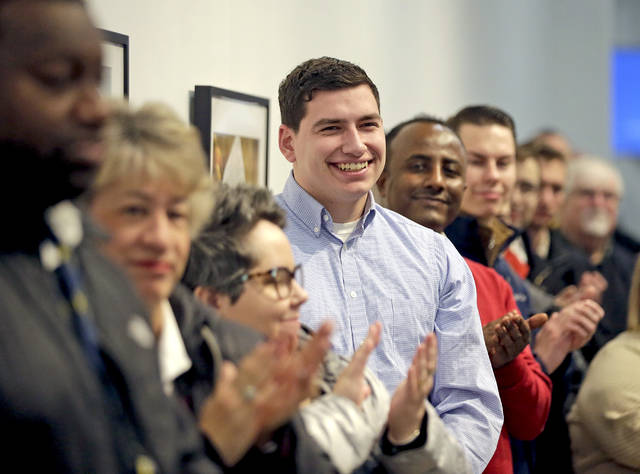 Wilkes University senior Hunter Hughes, center, is one of two students who served on the presidential search committee. - Bill Tarutis | For Times Leader

During his remarks shortly after being introduced as the seventh president of Wilkes University, Greg Cant quipped about his voice/accent — noting that he is a native of Australia.

“I’ve been told that it’s sometimes difficult to understand me,” Cant said. “I suggested we provide subtitles, but that was not possible.”

But it wasn’t the accent that concerned those in attendance — it was the voice that Cant, 60, will be for the university, the community and Wilkes students.

Cant vowed to be “an ardent champion” in creating opportunities for students that will better prepare them for success in their future careers and to inspire them to be leaders in their communities.

Two students — Hunter Hughes and Caroline Rickard, both seniors — served on the selection committee, giving them the opportunity to have significant input into the selection process.

“I am confident that Dr. Cant will be an asset to the student population,” Rickard said. “During his interview and later when he visited our campus, Dr. Cant showed great enthusiasm for Wilkes. He will be accessible and visible on campus.”

Rickard, 21 of Orwigsburg, said her parents are both graduates of Wilkes — her father, Christopher graduated in 1993, and her mother Kathleen, in 1992.

Hughes, who lives in Kingston, said Cant brings a lot to the table.

“Students want an advocate sitting in the office in the high tower,” Hughes said. “I’m confident Dr. Cant will be that advocate. We also need a president who will raise funds and Dr. Cant seems very capable of that.”

Hughes said Cant’s predecessor, Patrick Leahy, accomplished a lot of good while at Wilkes. He said he hopes the new president will improve existing facilities and create improved housing options.

“We hope he will be an ally for students,” Hughes said. “We have a good culture here and we want that to continue.”

Mark Mullins, 21 of Binghamton, New York; Richard Ermeus, 20 of Sparta, New Jersey; and Stephanie Hauser, 20 of Wilkes-Barre, said they hope Cant can continue and improve the sense of community that exists at Wilkes.

“We want him to maintain what we have here and make it even better,” Mullins said. “This is a small campus and we have a deep sense of community.”

“We want Dr. Cant to strengthen that,” he said.

Hauser said she looks for Cant to interact with students and value their opinions.

“We care about the community and we care about our campus and school,” she said. “Like what was said before, Wilkes is a family.”

Esther Davidowitz of Kingston, a longtime member of the Wilkes Board of Trustees, attended the ceremony and she was pleased at what she heard. She said Wilkes is fortunate to have a president with his background and vision,

“I find Dr. Cant to be most impressive,” she said.

“Dr. Cant seems like a logical well-informed man with excellent experience,” Davidowitz said. “It would be my hope that he makes it possible for more students to obtain scholarships. There is a large percentage of our population that doesn’t have the financial means to go to college.”

Davidowitz said she would like to see Wilkes provide more opportunities for students of all backgrounds.

“If a student wants an excellent education, come to Wilkes University,” Davidowitz said.

Impeachment Document: Replication of The United States House of Representatives to the Answer of President Donald J. Trump to the Articles of Impeachment