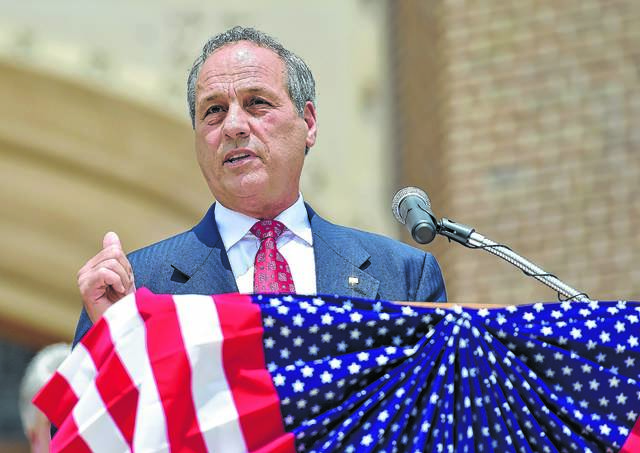 It’s Marsicano’s second run for Congress when in 2016 he lost as a Democrat to Republican Lou Barletta for the seat in the former 11th District. Three other candidates previously announced: Earl Granville, 36, of Scott Township; Harry Haas, 44, of Kingston; and Teddy Daniels, 44, of Wyoming.

This time the 71-year-old Marsicano, divorced himself from the Democratic party, its direction and leadership and declared allegiance to President Donald Trump and his efforts to fight the opioid crisis, strengthen border security and job creation.

“He represents her,” Marsicano said. “He’s perfectly in tune with her philosophy and I am not.”

The video released Thursday announcing Marsicano’s latest run mentions Pelosi first and aims to distance Cartwright, an attorney serving his fourth term, from the challenger shown in work clothes standing at an airport with small planes parked in the background and later seated in the cab of a piece of heavy equipment at his excavating and trucking business.

“Recently, I haven’t heard anything that I can believe coming out of Nancy Pelosi’s mouth, nor her No. 1 hack in Washington, Matt Cartwright,” Marsicano said in the video.

Explaining his party switch, Marsicano said, “I chose to leave the Democratic party. Why? I don’t believe in my heart the Democrats represent the America I grew up in. I support Donald Trump, our president.”

“You know, actions always speak louder than words. Those are the facts. Facts are stubborn things,” Marsicano said in the video.

However, Marsicano bristled when a reporter referenced his association with Robert Powell, a former Butler Township attorney involved in the “Kids for Cash” juvenile justice scandal with former county judges Michael Conahan and Mark Ciavarella. Powell and the former judges were sentenced to federal prisons for their various roles.

“I had nothing to do with that,” Marsicano said of the scandal.

“I’ll leave my record for the public to decide, not you or a member of the fake news media,” Marsicano added. “I’m tired of your bullshit.”

Back to the issues in the campaign, Marsicano noted the district sits in the heart of the anthracite coal fields that played critical roles in World Wars I and II. He said his first job was at the Number 40 Shaft on Cedar Street in Hazleton.

“There’s still family-sustaining jobs” related to coal in the region, Marsicano said. “I’m sympathetic to it. I’m in favor of protecting the coal industry and those jobs people depend on.”

Like his previous campaign, it will be mainly self-funded, Marsicano said. He also self-imposed a three-term limit if he is elected.