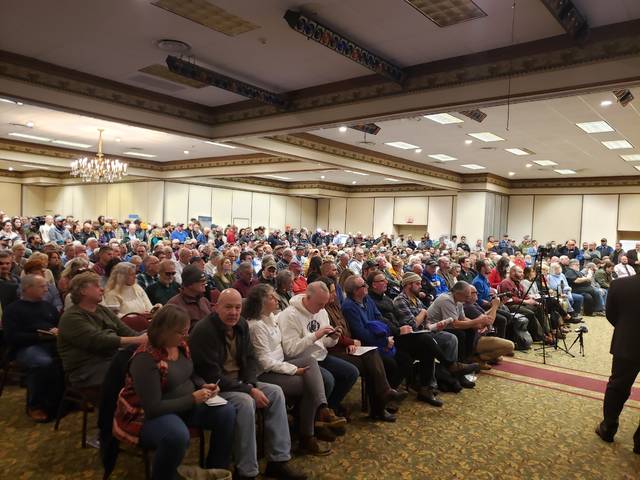 Hundreds listen to what the U.S. Army Corps of Engineers has planned for the Francis E. Walter Dam and Reservoir. Many had concerns over New York City’s involvement. -

WHITE HAVEN — Filling a ballroom at the Mountain Laurel Resort in White Haven, hundreds of residents came to hear more information about the U.S. Army Corps of Engineers’ plan to perform a reevaluation study for the Francis E. Walter Dam and Reservoir.

And while many seemed concerned that the result of the study would lead to New York City having an out-sized amount of control over the local water supply, a representative from the city’s Department of Environmental Protection said New York City has no interest in taking our area’s drinking water.

Thursday evening’s public meeting was one of the first steps in the reevaluation study launched by the Army Corps, that is co-sponsored by the Delaware River Basin Commission and the New York City DEP.

Hundreds gathered in the ballroom at the resort amid growing community concern over why New York City is involved in the plan. Paul Rush, deputy commissioner of the city’s DEP, said at the meeting that he wanted to “dispel some myths” about the city’s involvement.

“New York City is not interested in purchasing any drinking water, or having control over the reservoir,” he said.

According to Rush, whose statements were echoed by members of the Army Corps who spoke, the study is mostly to determine how to best improve the areas affected by the Francis E. Walter Dam — which include both our area and New York City.

The Army Corps’ study will focus, in large parts, on how to best supply New York City and its nearly 9 million citizens with water in the event of a massive drought.

Currently, water would be released to the city through the Delaware River, but that could take nearly six days of travel time before it got there. It could take significantly less time if that water were released from the area of the Francis E. Walter Dam.

Rush said, though, that it’s important that this study rely on scientific facts, and not simply the desires of New York City.

Dan Caprioli, from the Philadelphia District of the Army Corps, said the study will be looking for the best ways to improve the lives of everyone who has a vested interest in the project, including the people who live around the dam in our area.

Caprioli said that eventual improvements could lead to improvements to fisheries and recreation in the area around the dam.

“Win-win solutions, that’s what we’re going to be looking for,” he said.

The study is still in its very early stages, with the Army Corps not even slated to make tentative proposals for improvements until the end of this year.

However, plenty of people were still skeptical, including some of our local elected officials.

State Sen. Lisa Baker, R-Lehman Township, said the Army Corps needs to commit to helping our area, too, and not just New York.

“What is the long-range contingency plan if water is released and then a drought happens here in our region?” Baker asked. “Who helps counter our water emergency?”

Resident Stephanie Cibello, who lives near the dam, said she has major concerns.

“New York, you are not a friendly neighbor,” she said, referencing sewage dumped by the state into the Susquehanna River.

“Please don’t sell us out,” she said. “Listen to what we have to say. We are not going away.”

Residents will have more chances to make their voices heard, with the Army Corps scheduling two more public meetings to be held this fall and next spring. These will be definitively scheduled at a later date.