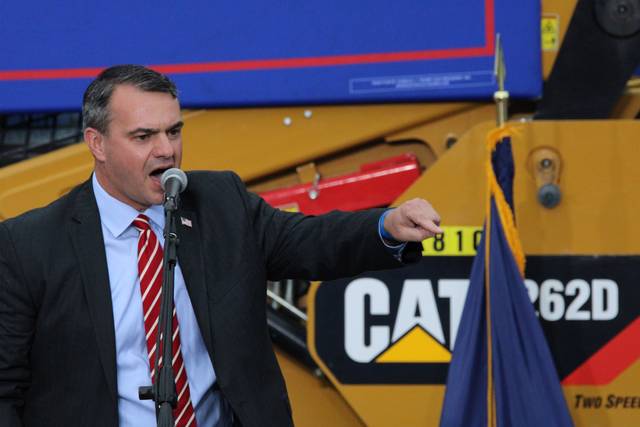 Jim Bognet, the Republican who is running to unseat Rep. Matt Cartwright, D-Moosic, in the 8th Congressional District, is seen speaking before introducing Vice President Mike Pence during a rally at at Kuharchik Construction Co., Exeter, on Tuesday. 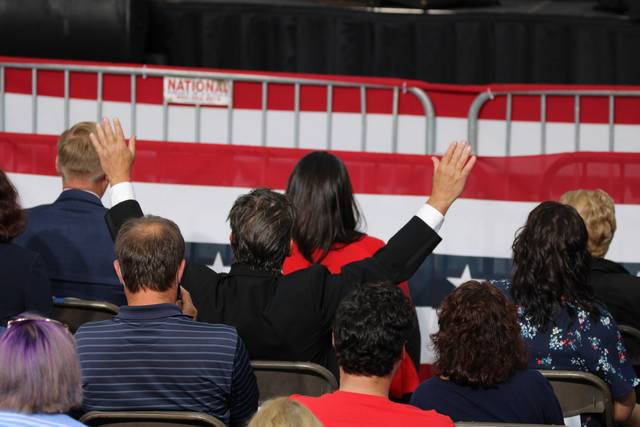 A supporter extends his arms while Vice President Mike Pence offers a prayer on Tuesday prior to his campaign speech. 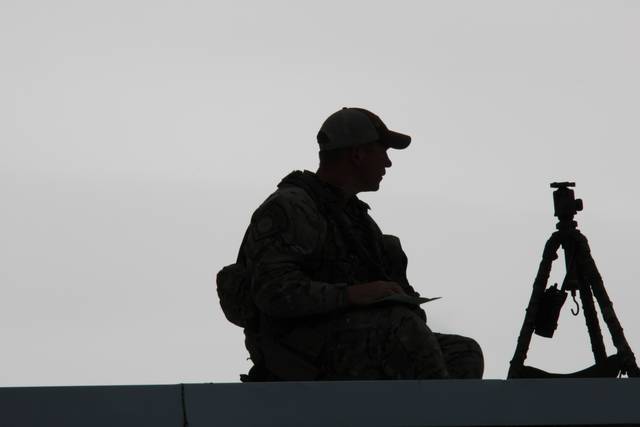 Security can be seen on a nearby rooftop during Vice President Mike Pence’s visit to Kuharchik Construction Co., Exeter, on Tuesday. 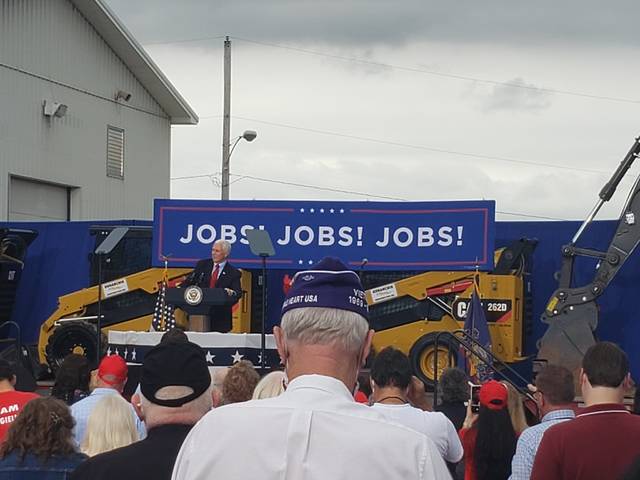 EXETER — Amid chants of “four more years, four more years,” Vice President Mike Pence on Tuesday told about 300 supporters gathered outside Kuharchik Construction Co. that they have never faced a more clear decision than they will on Nov. 3.

“Pennsylvania and America need four more years of President Donald Trump,” Pence said in his opening remarks at what was dubbed a “Workers for Trump” rally.

And then Pence went on to assure the crowd that he and Trump will “protect the sanctity of life, protect your guns, protect our borders, rebuild our military, revive the economy, restore law and order and bring back more jobs, jobs, jobs from overseas.”

Pence said a vote for Trump-Pence is a “vote for America.”

He ended his speech by saying, “We will make America great again — again.”

Pence was introduced by Jim Bognet, the Republican candidate for Congress in the 8th Congressional District, who will be challenging three-term incumbent Rep. Matt Cartwright, D-Moosic, in November.

The vice president took the stage shortly after 4:30 p.m. and spoke for just over 30 minutes.

Pence took several shots at Democratic nominee Joe Biden noting that he realized he was not far from Scranton, the former vice president’s birthplace.

“But this is Trump country now,” Pence said.

Pence knows the value of Luzerne County, which gave Trump a resounding victory over Democrat Hillary Clinton in 2016 — the Republican earned 78,688 votes to Clinton’s 52,451 — a difference of 26,237.

That gave Trump Pennsylvania’s 20 electoral votes and many political experts say, it won him the White House.

“Four years ago, a movement was born,” Pence said. “And it looks like we’re doing just fine this time in Pennsylvania.”

“And look how far we’ve come,” Pence said, again hitting on all the salient points that have resonated with middle America.

‘We stand for law and order’

“Let me make it clear,” he said. “We stand for law and order in every town and city in America.”

Pence criticized Biden for his refusal to condemn Antifa and for denying that he would ban fracking in the natural gas industry, a move Pence said would cost 500,000 jobs.

“Joe Biden has never offered a plan to end the violence,” Pence said. “You won’t be safe in Joe Biden’s America. Rioting and burning businesses is not peaceful protest. Those rioters will be prosecuted to the full extent of the law. We will have law and order in America for all.”

Pence said he and Trump will always “stand on the thin blue line” and they will never defund the police.”

Pence said in the last three and a half years, Trump has created seven million family sustaining jobs after the previous Obama-Biden administration lost hundreds of thousands of jobs.

“And then the coronavirus struck from China,” Pence said. “ President Trump took immediate action and stopped everything coming in from China.”

Pence said a vaccine is on track for distribution by the end of the year.

“Our hearts go out to all families who have lost loved ones to the coronavirus,” Pence said. “And we commend all of the front line workers who have helped to stop the spread of the virus. And we are opening up America again.”

Despite historic levels of unemployment, Pence said that more than 9 million Americans have gone back to work since the beginning of the coronavirus pandemic.

Pence said voters need to decide on Nov. 3 who they trust.

“President Trump is a proven leader,” Pence said. “He will bring America all the way back.”

“Joe Biden will raise your taxes,” he said. “President Trump cut your taxes and we will cut more.”

Pence hammered away at the core values of Trump supporters.

“President Trump knows that if we don’t have a border, we won’t have a country,” he said. “Joe Biden will open the borders. We have built 300 miles of the wall and over the next four years we will finish the job.”

Pence said Trump is the “most pro-life president in history”and he believes in life and liberty and the freedom of religion for all Americans.

Speaking to Democrats, Pence said the Democratic Party is not the party of their mothers and fathers.

“Decide right here and now that Joe Biden will never be president of the United States,” Pence said. “Elect Donald Trump for four more years. We will appoint more conservative judges, increase support for the military and we will continue to drain the swamp.”

Pence said Trump is “the real deal,” that he never wavers, never quits.”

“He fights for us,” Pence said of his boss. “Now we must fight for him.”

“It’s deeply cynical that Mike Pence is choosing to brand this event as one for ‘workers,’ considering the Trump-Pence Administration has been one of the most anti-worker and anti-union administrations in modern history.

“Northeastern Pennsylvanians know that at every opportunity — from the 2017 tax bill to COVID-19 relief — the Trump-Pence White House has actively chosen to pad the pockets of wealthy Republican donors and rich CEOs while neglecting working Pennsylvanians.

“Pennsylvanians deserve a champion for working families as their President, and Scranton-native Joe Biden will be that President.”

Several area Democratic officials and a key union leader also held a virtual press conference earlier Tuesday, criticizing the Trump administration for its response to the pandemic and job losses, as well as for what they said was a poor record on workers’ rights.