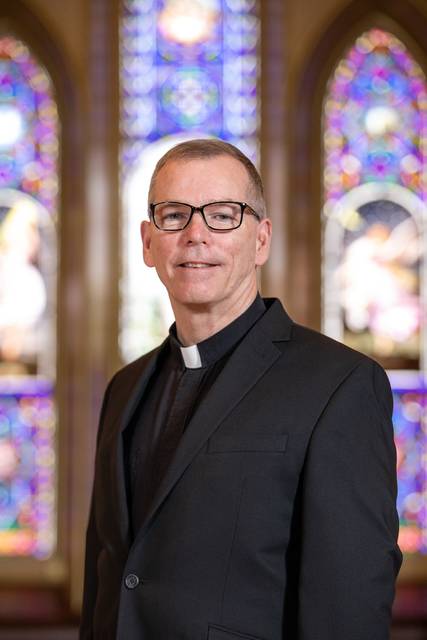 WILKES-BARRE — The King’s College Board of Directors announced Friday evening that The Rev. Thomas Looney will be the school’s next president, beginning this July. The college released the following statement:

“Fr. Looney has a great passion for the mission of King’s College and has spent the majority of his ministry advancing that mission,” remarked Thomas R. Smith, chair of the King’s College Board of Directors. He continued, “He has the experience and abilities to perform the duties of the president due to his various leadership positions throughout his Holy Cross ministries and roles at King’s College.”

John Nackley, president and CEO of InterMetro Industries Corporation and King’s College Board Member served as chair of the search committee.

Fr. Looney’s loyal service to the mission of King’s College began nearly 35 years ago. He currently serves King’s as the associate vice president for academic success, the director of campus ministry, and College chaplain. Fr. Looney made his profession of vows in the College’s former Chapel of Christ the King on August 13, 1986 and a few weeks later began teaching Theology at King’s and serving as a deacon at St. Nicholas Parish in Wilkes-Barre. He has also previously served as associate professor and chair of the Department of Theology, associate vice president for academic affairs, and dean of the faculty at King’s. Fr. Looney led the efforts to restore the former Memorial Church on North Street in Wilkes-Barre that now serves as the Chapel of Christ the King at the George & Giovita Maffei Family Commons.

In recognition of his exemplary service to the College, Fr. Looney was awarded the All College Administration Award in both 2016 and 2020, and the All College Teaching Award in 2001. A widely respected and admired member of the King’s family, Fr. Looney enjoys many deep relationships with King’s students, faculty, staff, alumni, and friends.

Fr. Looney commented on his selection as the new president, saying, “I am deeply humbled and excited by the opportunity to serve the mission and community of King’s College in this new role. It has been a great blessing to have worked with three outstanding presidents (Fr. Lackenmier, Fr. O’Hara, and Fr. Ryan), board members, alumni, administrators, faculty, staff, students, and my brothers in Holy Cross. I look forward to deepening these collaborations and working diligently with the help of God’s grace to advance the noble student-centered mission of King’s.”

Born in Brooklyn and raised in Otisville, NY, Fr. Looney began formation to religious life in the Congregation of Holy Cross at Stonehill College. His vocation to priesthood and religious life was the result of his family’s deep faith; his mother’s uncle was a Holy Cross Brother and his father’s uncle a diocesan priest. Fr. Looney was ordained a priest on June 13, 1987.

He previously served as vice president for Catholic identity and mission at Stonehill College in North Easton, Ma., provincial superior for the Eastern Province of Priests and Brothers, and provincial councilor for the United States Province of Priests and Brothers. Fr. Looney earned his Bachelor of Arts degree from Stonehill College, a Master of Divinity from the University of St. Michael’s College in Toronto, Ontario, and a Doctorate in Theology from the Catholic University of America in Washington, D.C. The subject of his dissertation was ecumenical ecclesiology.

In addition to many publications and conference presentations, Fr. Looney has served as the leader of numerous retreats and workshops and has performed extensive community service in the communities in which he has resided, most notably over several decades here in the Wyoming Valley.

He has served our Diocese, ministering to local churches and their parishioners throughout the area. Fr. Looney currently serves as a member of the Board of Directors of Stonehill College, Renew International, and the Fr. Peyton Centre in Attymass, Co. Mayo, Ireland, and is a member of the Congregational Religious Life Commission in Rome, Italy.