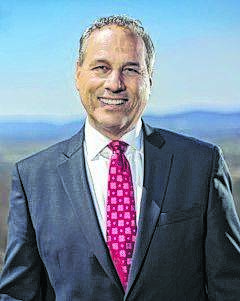 Everyone deserves a second chance, and third and fourth if they are truly trying to change for the better. Mike Marsicano proved in a mere matter of minutes he does not deserve yet another crack at a political career.

Marsicano wants to be a U.S. congressman (again). Marsicano also, incidentally, hates this newspaper. Why? Because we practiced honest and effective journalism on him when he was a one-term Hazleton mayor, and we remind people of his past every time he tries to run for another office.

This time he decided to switch registration to the Republican party, which alone should give Republicans pause in considering his bid. The man is an opportunist. Even if you are a staunch Trump supporter, you would do well to consider other candidates who have embraced the GOP more consistently.

He also couldn’t get through a brief interview with Times Leader staff writer Jerry Lynott without shouting “fake news” and using a curse word we can’t print in a family newspaper, showing his lifetime inability to face legitimate criticism, much less to defend his own past without hurling invective.

Marsicano used one of his favorite old saws: “Facts are stubborn things.” Well, as this paper has done in the past, let’s review some of those stubborn facts he prefers no one bring up.

Marsicano has become Luzerne County’s very own Rasputin of elections. The Russian mystic from the Tsarist era, you may recall, supposedly had to be stabbed, poisoned, poisoned, shot, shot again and finally dumped into a river before anyone felt sure he was dead.

In Marsicano’s case, he won one term as Hazleton City Council and parlayed it into one term as Hazleton mayor before he was roundly defeated in his reelection bid. He didn’t even make it through the spring. Despite the power of incumbency, Hazleton voters tossed him out in the Democratic primary for Jack Mundie, who in turn lost to Republican Lou Barletta.

Marsicano tried to become mayor again in 2007, and suffered an even more humiliating defeat: Despite being unopposed on the Democratic ticket, he lost the nomination to (drumroll) Barletta, who didn’t (and legally couldn’t) even officially appear on the Democratic slate, yet who got enough write-in votes to beat Marsicano. Anyone voting in the upcoming congressional Republican primary should keep in mind how thoroughly the people most familiar with his political behavior rejected him.

He took his first stab at becoming a U.S. congressman in 2016 by running against Barletta, who had himself managed to win a federal seat on his third try. Marsicano was again trounced, with Barletta taking more than 64% of the vote.

There are lots of other facts (not “fake news”): Marsicano took over Hazleton with a budget surplus and left it with a deficit. He spent years partnering and palling around with attorney Robert Powell, a pivotal figure in the county’s juvenile justice scandal known as “Kids for Cash.” As mayor, Marsicano hired a friend who had been on disability leave from the fire department to be fire chief over city council’s objections; And he boosted the city police maximum pension from 50 percent to 75% in a move the state auditor general ruled illegal.

And that’s just the most egregious stuff.

Facts are stubborn things, and Marsicano should learn to admit to them. Until then, GOP voters should look elsewhere. There are better candidates seeking the nomination.