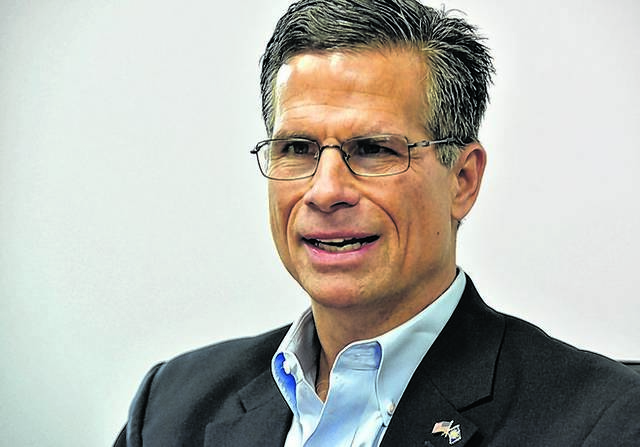 We usually don’t use this space to praise a politician.

But we are making an exception today.

Kudos to freshman Congressman Dan Meuser for injecting himself into the ongoing debate surrounding the controversial stormwater fee that many across the Wyoming Valley feel is being unfairly foisted upon them.

In case you missed it, Meuser is calling for a suspension of the fee until the property owners who must pay it get more information.

Now, we know you cynics out there are going to say the businessman-turned-lawmaker is simply looking for a way to score some political points because it’s clear as day the new fee is about as popular as a bad rash.

But even if that may be true, Meuser deserves credit for several reasons.

First and foremost, his recent letter to state Department of Environmental Protection Secretary Patrick McDonnell calling for the fee to be suspended puts the congressman squarely at the forefront of this evolving issue.

Sure, other politicians have spoken up and expressed concerns, but Meuser has actually taken meaningful action and is being quite forceful in taking up a torch for the people he represents.

And there is some risk in doing this for a politician, because if he fails to get the fee suspended or some other remedy to sooth the public outcry, he could easily morph from public advocate to a potential target for public criticism.

Here’s some of what Meuser recently had to say about the fee:

“This is a serious and urgent matter for the constituents of my district, and I plan to continue to seek answers until these fees are explained and municipalities and the people understand how they can be reduced.”

Again, good for him.

He also pointed out how the extra bill could prove to be “unbearable for many taxpayers,” pointing to a specific example about one Dallas farm owner who is facing a $1,400 annual fee just for stormwater runoff.

We’re sure most folks would agree that just seems unfair.

But it’s also unfair to bash the Wyoming Valley Sanitary Authority, which rolled out the fee and is now seemingly doing what it can to react to the public’s concerns.

It’s not our intention to call for suspending the fee or perhaps abolishing it altogether and instead meeting a federal mandate to clean up the Chesapeake Bay via some alternative.

However, we have to point out a few facts.

The Wyoming Valley is about as middle class as it gets.

Not many rich folks around here, just people working hard trying to earn a living, raise their kids and eke out some enjoyment from life.

Yeah, a pristine Chesapeake Bay is a noble goal and something we all should eventually work toward.

However, is it practical to saddle many people living paycheck to paycheck with this significant expense at a time when other areas that should be doing their part don’t seem to be doing much? (And that’s to mention nothing of the tens of millions of gallons of wastewater discharged in Binghamton, N.Y., directly into the same river that we are trying to protect to help the same bay hundreds of miles downstream.)

One good thing emerging from the fee fight is that it has showed Meuser has guts. State Rep. Karen Boback is doing her part, too.

We would encourage more of our local leaders, especially our well-compensated representatives in the bloated state House, to follow their examples and start making more of a stink.

It might be the only way we get the answers we deserve.