State Rep. Gerald Mullery insists he won’t let a small but vocal group of county treasurers stop him from pushing a bill that gives hunters a choice where to buy their antlerless license.

The president of the Pennsylvania County Treasurers Association said her group isn’t going to stop fighting the bill in order to retain the $1 they receive for each antlerless license they process.

Now, more than a year-and-a-half after Mullery, who is vice-chairman of the House Game and Fisheries Committee, introduced House Bill 231 that would allow hunters to purchase their antlerless licenses from outlets, including online, other than county treasurers, he believes there may be a compromise that should ease concerns over lost revenue for counties.

As has been the case for years, hunters send their antlerless license applications to county treasurers, who process and send out permits. Counties receive $1 for each application they process, but issues in some counties have caused hunters to be left without a license.

Mullery’s bill is the result of an incident in Luzerne County in 2014 when applications weren’t processed on time and some hunters didn’t receive a license before they were sold out.

This year, time is even more critical for resident hunters, who are given preference in applying for antlerless licenses before nonresidents. The first round of antlerless licenses went on sale on July 11. Residents typically had a two-week head start before non-residents could apply, but the Pennsylvania Game Commission shortened that window to one week.

“Given the problem we experienced in Luzerne County and others in the state, plus with the shorter schedule for residents, now seems like the time that this bill would really benefit hunters,” Mullery said.

County treasurers are concerned that the bill would result in the loss of revenue as hunters would be able to buy their antlerless licenses elsewhere. Mullery said he understands that some cash-strapped counties could view the $1 processing fee as a reliable source of revenue, but that’s not enough to sway him from pushing the bill, which has been stalled in the legislature six times so far.

“We’re not going to let a group of 60-plus people have a greater voice than hundreds of thousands of hunters,” Mullery said. “The average statewide revenue per county from the sale of doe licenses is between $8,000 and $9,000. That doesn’t appear to be a great impact on these county row offices.”

Butler County treasurer Diane Marburger, who is president of the County Treasurers’ Association of Pennsylvania, said not only do counties rely on the revenue from processing doe license applications, it’s a task that many of them take seriously.

In Butler County, she said, approximately 21,000 doe licenses are processed every year and the county spends $3,500 to hire seasonal help to make sure the task is done in a timely manner.

“They get geared up for doe season at my office. They really take this to heart,” Marburger said.

To quell concerns about lost revenue, Mullery said he’s prepared to support a change to the bill that would direct all processing fees to the applicants county of residence regardless of where they purchase a doe license. If a hunter opts to buy their doe license from a store as opposed to the county treasurer, Mullery said, the county in which they reside would still get the $1 processing fee.

“That eliminates the monetary objection to the bill. Some counties might still oppose it because they process applications for residents outside of their county, but it’s 2016 and we have a better, more updated system in place to do this,” Mullery said.

Marburger called the potential change a “new wrinkle” in the debate and questioned who would be responsible for determining county residency.

“How would you track residency? Who is going to ensure that $1 fee will go back to the county?” Marburger said. “It sounds like an accounting nightmare to me.”

Mullery said he has yet to hear a negative comment regarding the bill from any of his constituents and even though the proposed legislation has been stalled numerous times, he’s not giving up.

He’s even prepared to take his name off the bill and hand it over to a Republican to introduce if it means a greater chance of getting it passed.

“In some counties the row officers still hold a lot of political clout and they’re flexing their muscle asking their state legislators to hold the bill,” Mullery said. “I’m beyond frustrated.

“I’m told there’s a willingness to run the bill in the Senate, if we can just get it there.”

Marburger said since there is a limited number of doe licenses available for each Wildlife Management Unit, Mullery’s bill would force hunters to line up at retail outlets just to get their licenses before they sell out. Her office has never missed a deadline to process doe licenses, she said, but admitted a change might be unavoidable.

“Inevitably, they’re going to take it away and we’re not going to do antlerless licenses anymore,” Marburger said. “I just hope it’s a good system that replaces us.” 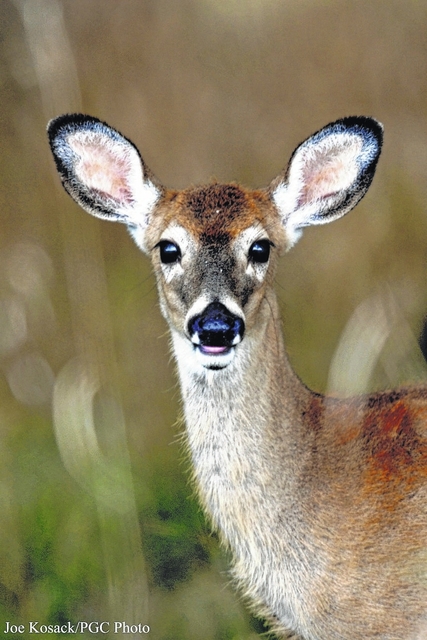