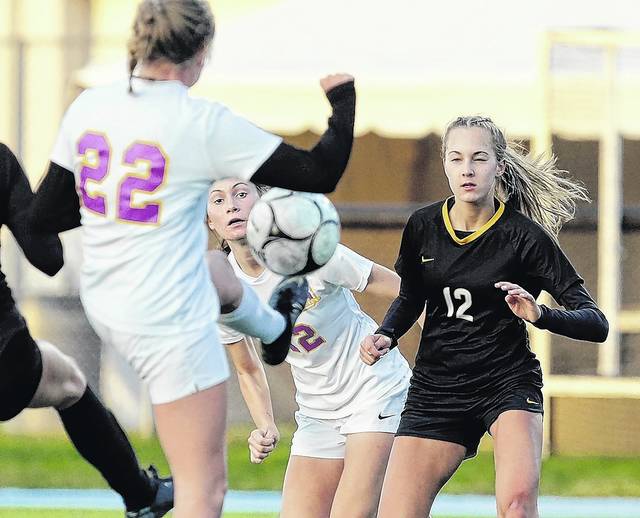 It is about time the Lake-Lehman defense had its due.

Sure, much is to be made about the Black Knights girls soccer team’s prolific scoring. After all, Lake-Lehman did rack up 173 goals this season.

But in the state playoffs, against players that double-up on some of the top club teams, it will be their defense that carries them.

Lake-Lehman is one of three District 2 girls soccer teams to advance to the PIAA quarterfinals set for Saturday. The Black Knights take on Northwestern Lehigh at Central Columbia in the Class 2A playoffs.

“We just finished off a nailbiter against a solid Boiling Springs team,” Lake-Lehman coach Kelly Spencer said. “It’s nice to have the first game be what brings us back to reality.

“We’re focused. They know it’s going to be tough. Everything we do has to count.”

The thorn in the side of opposing attackers has been the quartet of Paige Motovidlak, Lauren Chapple, Marissa Brdaric and Sarah Salus.

Together, with goalkeeper Emma Stroud, they provided the offense a tremendous safety net.

“Our defense does not get enough credit,” Spencer said. “How well we have done so far in district and states is a causation of how well the mids and forwards have played.”

Winners of three of the past four District 2 Class 2A championships, Lake-Lehman reached the PIAA quarterfinals for the second time since the spring soccer merger. The Black Knights will look to reach the semifinals for the first time since 2016 when it knocked off Saint Basil in penalty kicks.

To get there, Madison Brdaric scored the game-winning goal in the 49th minute of a 2-1 victory over last year’s semifinalist Boiling Springs. Lake-Lehman also received a goal from Chloe Weaver.

Expect an entertaining game between two strong midfielder corps. Lake-Lehman has relied heavily upon Abby Paczewski, Weaver and Chase Purdy to spread the ball around and create chances up top.

Bailey Groff anchors the Tigers’ defensive unit that has held each of its past 14 opponents to one or fewer goals. She assisted the lone goal in Northwestern Lehigh’s first round win over Central Columbia, a 74th minute connection to fellow senior Jenna Lowthert.

A 16-game winning streak will be paired against an undefeated Philadelphia program in the quarterfinals.

It marks the first time in Dallas’ three-year district championship run that the Mountaineers advanced past a difficult PIAA first-round matchup. Like Lake-Lehman, the Mountaineers took down last season’s semifinalist. Dallas defeated Mechanicsburg, to whom they fell 4-0 in 2018, in a 0-0 nail biter that ended 4-2 in penalty kicks.

Ali Francis, Emma Sweitzer, Kaitlyn Conrad and Sarah Krokos each converted PK chances against Mechanicsburg, and Jensen Meade brilliantly made 14 saves and a PK stop to preserve the win.

Known for the team’s success on set pieces, Catholic League MVP Emily Deluisi scored twice in a 4-2 first round win over Strath Haven win to advance to the quarterfinals for the second straight year.

Meade and the Dallas defense have posted three consecutive postseason clean sheets. Francis, the school’s all-time leading scorer, is the area’s most proficient scorer in the clutch and scored a game-winning overtime goal over Berwick in the district final. Look to midfielder Sweitzer to manufacture chances with long balls out of the midfield.

It is Dallas’ first time in the state quarterfinals since 2014.

The Bulldogs continue not to be knocked down this season. With a roster of just 15 players that suffered an injury to one of the district’s most dynamic players, Berwick moved to the state quarterfinals for the first time since the sport moved to the fall eight seasons ago.

Berwick defeated Athens 1-0 in the first round. Emma Colone scored the lone goal, and Jadyn Michael earned the shutout in goal.

Katie Starr provides midfield presence for a Bulldogs’ team that will resemble the defensive-minded look that nearly foiled Dallas in the district championship game.

Villa Joseph Marie is the reigning PIAA champion and is seeking its 12th state title. Katie Sullivan leads an offense that posted a 3-0 victory over Conrad Weiser in the first round.